Steven Gerrard would have signed new Liverpool contract in summer

Liverpool captain Steven Gerrard admits that had the club offered him a new contract last summer he would not be bringing an end to his long association with the Reds at the end of this season.

However, the midfielder insists he does not want to “point the finger” at anyone for his impending departure.

A contract offer was not made to Gerrard, who turns 35 in May and is reported to be on the verge of signing with Major League Soccer side LA Galaxyuntil November.

The Former England Captain had already been told by Brendan Rodgers his playing time would be managed.

As, such a tactic had already seen him left on the bench for Liverpool’s Champions League match against Real Madrid in the Bernabeu and that, combined with the delay in offering him an extension, resulted in the player coming to a decision about his future. 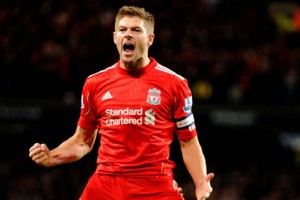 If a contract had been put in front of me in pre-season I would have signed it,”said Gerrard”I would just retired from England to concentrate all my efforts on Liverpool. I didn’t want my club games to be tailored” he added.

Gaffer Brendon Rodgers spoke to Gerrard in late November and it came as something of a surprise to the player. But once the writing was on the wall the former England captain knew his days at Anfield were numbered.