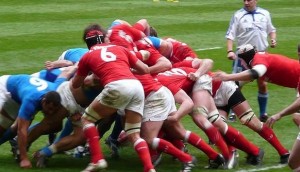 As we have come to the end of the group stages of the World Cup, I feel this is a good time to reflect upon the 2011 competition in New Zealand. We have seen upsets, dominance, a black wave of power, a French fall, Tongan joy, Irish successes, Australian dismays… But England going quietly along with their business making headlines for everything except their rugby.

Yes, in the group stages of a World Cup you may be shocked to hear me say that England have been a relative low light for the rest of the rugby playing world. But even so, we have got through the group stages beating tough opposition including the old northern foe Scotland along the way.

Beginning with Pool A. The favourites New Zealand, home at last and with their nation behind them, with enormous pressure to perform on the biggest stage, reign supreme at the top of the pile. The Black tide washed away all in its path easily disposing of Tonga Canada and Japan. Their biggest test seemed to be France; however at Eden Park Auckland, the All Blacks again dominated the unpredictable fiery French winning a comfortable 31-17…A satisfactory revenge for the New Zealanders after the 2007 World Cup. France took the headlines in this group however with poor performances stemming from a weak win over Japan in the final quarter of the match, then being beaten by the All Blacks, and an awful loss against Tonga with the final group stage match only just putting them into the quarter finals.

Group B was much less exciting. This ended as expected with England topping the group and Argentina falling close behind Scotland yet again failing to reach the knockout stages. England were all but convincing though. With more contact and aggression at the break down shown in a club after the Argentina game, the team quickly were subject to ridicule of the English Press. Easy wins and good performances against Georgia and Romania helped the situation, but this was not shown in the tussle with Scotland. With the English talisman missing kicks, the blaming of World Cup balls, doubts about the stand-in captain, and bans for water and Tee boys, England seem to have limped into the knockouts… But limped on they have ready to face another foe (even though everyone is a foe when it comes to England) France.

Group C had perhaps the biggest upset after France’s loss to Tonga. The powerhouse Australia, ripe with injury it has to be said, tipped by many to be a serious contender for the Webb Ellis trophy, were unseated by the home nation, Ireland. Australians will argue that first or second in the group, it does not matter, to win the World Cup you have to beat everyone. The Irish will say they have beaten one of the best teams in the competition and can go the distance. Personally I would have liked to have seen the Irish be beaten by the men down under… But that’s just me. The consolation is, in the quarter finals to come this Saturday, Ireland vs. Wales? At least one of them will have a flight home.

Finally Group D. I felt this was the most impressive group. Wales looked dangerous from all angles seeming to have found a very dangerous form which they will carry with them against Ireland, their young captain Warburton leading impressively from the front. Yet they could not match the organisation and sheer power of South Africa who also seemed to have peaked just at the right time dispatching all in their path.

With the knockout stages as below, the stage seems to be set for an excellent weekend of rugby. So set the alarm ready, get the coffee on, quilt out, and get ready for the action of the World Cup finals of 2011.