A vote to kick Sepp Blatter out of football 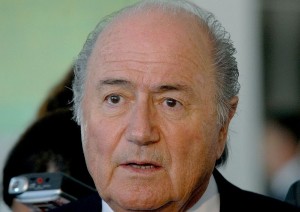 There comes a time in any business that heads have to roll and where football is concerned it is now high time that the FIFA President Sepp Blatter hang up his suit and tie.

Not only has he been at the centre of the most controversial issues regarding football since he became President in June 1998 but he has made so many slip ups, followed by quick apologies that he really can’t be considered to take football forward anymore. If the madness of King George is anything to go by, then the madness of Joseph Blatter, in footballing terms, has absolutely thrashed the King 7-0.

Even when Blatter was first elected in 1998 there were rumours of backhanders with some suggesting they were offer up to $100k to vote for the Swiss at the time. Under his control FIFA became a closed shop despite allegations of financial mismanagement, Blatter, as FIFA President always came out of the issue unscathed, mostly due to him being in control of the investigations.

With regards to womens football, in 2004, he even suggested that they wear tighter clothes in order to bring more male fans in to watch the sport. Add to this that he has publicly criticised referee’s displays at World Cups, criticised the EPL for allowing too many foreigners to play the game within the English game, allowed the French to join the 2010 World Cup despite there being an obvious handball leaving the Irish at home, still dismissing the fact that technology is required in the modern game, and his latest remarks that if there is racist banter between players on the pitch, a handshake at the end of the game should see that all is forgotten.

The biggest balls up of all was the latest vote on the next World Cup which was crowded with controversy and proven to have involved backhanders once again, most involved were suspended or expelled from football. Blatter? Well he was again voted in as FIFA President but did not ask for a re-vote on the 2022 Qatar Olympics despite it obviously involving so much corruption. The fact that it will be too hot during the competition is something he nor FIFA representatives really thought about at the time and now he is even suggesting it be moved to winter.

There is not really much to find that is good about Sepp Blatter and what he has done for FIFA but the facts speak for themselves. He is 75 years old, has lost the plot and has no idea about the modern game of football.

It’s time for a new FIFA President and we realise that normally it is a case of “better the devil you know” in this case we shall make a large exception and ask that a new, younger devil be brought in to replace him.

Please find time to vote below, pass on to family and friends and if we get enough votes we shall pass this on to FIFA.

Quotes made by Sepp Blatter.

“Because I love football and I love the footballers.”

On Governments aasking for FIFA to be investigated.

“If governments try to intervene in our organisation then something is wrong, I think Fifa is strong enough to deal with the problems inside Fifa. I am sure that the day after tomorrow at the congress we will prove we can solve the problems – if there are any – inside the congress.”

“It’s up to the national associations and their leagues to limit the entry of foreign players.”

“The source of wealth is from individuals with little or no history of interest in the game, who have happened upon football as a means of serving some hidden agenda.”

“What I am most proud of is the legacy of hope that FIFA and football leaves around the world. It makes all of the efforts and energy I pour into this job worth it.”

On the recent uprising of racism in football.

“I would deny it. There is no racism. There is maybe one of the players towards another – he has a word or a gesture which is not the correct one. But the one who is affected by that, he should say that this is a game. We are in a game, and at the end of the game, we shake hands, and this can happen, because we have worked so hard against racism and discrimination.”

On the FIFA corruption and voting scandal crisis.

“Crisis? What is a crisis?

“I just feel it’s the straw that broke the camel’s back.When you see the corruption they’ve had at Fifa, the comments he made about homosexuals not going to Qatar, the way he talked about women’s football, the style of the arrangements for the World Cup, the fact he won’t have technology.”

“Your comments on racism are so condescending it’s almost laughable. If fans shout racist chants but shake our hands is that OK?”

“For him to say this in public is either very honest or very foolish. I am absolutely disgusted, lost for words, I cannot believe he has said something like that with all the issues that have gone on. I am absolutely fuming.”

“Enough is enough. He has to go. He has overstepped the mark this time. It has to be resignation.”

“He has never been in the position of being abused for the colour of his skin. I’m an ambassador for the Kick It Out campaign. He should just be saying ‘Let’s get rid of it from the game, worldwide, so football is clean’. It is a flippant remark. Time after time he does not seem to think about what he is saying. He has no idea what goes on on a day-to-day basis. If he did, he wouldn’t have come out with that. People can’t be as ignorant as him and stick their heads in the sand.People do say things in the heat of the moment. But you can’t brush that under the carpet with a handshake. You have to take action.”