The Blues will reportedly now accept a loan deal to offload Egyptian winger Mohamed Salah to Roma, after realising their valuation of the player is unlikely to be met. 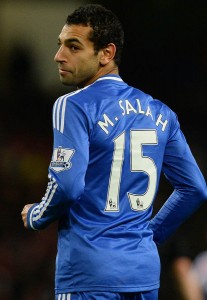 Chelsea have been holding out for a fee of around €15m for the 22-year-old, who joined the club from Basel less than 12 months ago and has played just 268 minutes of football over that period.

But after previously insisting on a permanent deal Chelsea have changed course and are now willing to send the player out on loan.

The Italian club, AS Roma are in pole position in the race to claim his signature, according to the Italian media, with Besiktas, Hamburg and an unnamed Premier League team also said to be interested.

The Stamford Bridge side signed Salah towards the end of last season’s January transfer window after he impressed against them in the Champions league. He scored for Basel in both group stage victories over Jose Mourinho’s side and was snapped up four months later.

The Egyptian has failed to establish himself as a first-team regular and now his time at Stamford Bridge looks to be coming to an end. A late goal in the 6-0 drubbing of Arsenal last season has been the highlight of his spell in English football.