Adam Lallana could return from injury for Aston Villa clash

Adam Lallana may be back in contention for first team action against Aston Villa this weekend.

Our attacking playmaker injured his thigh early on against Leicester on New Years Day with scans revealing a tear which it was thought would keep him out for three to six weeks.

However, the gaffer revealed in his press conference yesterday that the England man is under consideration for action at Villa Park  as he is two weeks ahead of schedule in his comeback.

“He’s ahead of schedule in terms of rehabilitation and we are hoping he can join the group tomorrow in training,” said Rodgers. 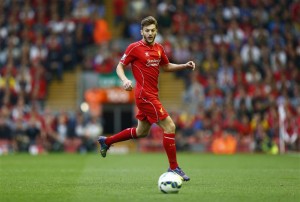 “If he’s not available for the weekend, he certainly will be for Chelsea. He’s a wonderful technician and he links up very well with the players when he plays. He will only get better with time and as he progresses.” He added.

It was a shame Lallana got injured as he was finally looking settled following his move from Southampton this summer.

Though with Sterling thought to be back as well for the trip to Birmingham, we could see that impressive three man attack of the two England internationals and Coutinho against Paul Lambert’s side. Wouldn’t want to be them.