The Gunners will face Championship club Brighton and Hove Albion in the fourth round today after their excellent 2-0 triumph against Manchester City last weekend.

Now a tremendous opportunity has presented itself for Arsenal as they continue pursuit of their second straight FA Cup.
Most of the Premier League’s top clubs fell on Saturday. First-place Chelsea, Manchester City, Tottenham and Southampton were all eliminated from Cup play after astonishing losses to lesser clubs. 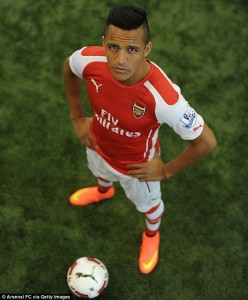 The Gunners began their defence of the FA Cup with a comfortable win against Hull, the team they beat in last season’s final, earlier this month.

The Frenchman gaffer has frequently used the domestic cup competitions to give some of his squad players a game, and several of the players who starred in the Gunners’ win at the Etihad are likely to be left out of the team at the Amex Stadium.

Given Arsenal’s recent injury troubles though, it could be a stronger than usual cup side, with a number of players available again but short of match fitness. Wenger confirms that the German World cup winner Mesut Ozil will play today as he will give rest to several key players.

The former Barcelona star Alexis Sanchez will finally get some time off as he is continuously playing for the Gunners ever since he moved in summer.He didn’t find the back of the net in the last game but midfielder Santi Cazorla recorded his fifth goal of the year and forward Olivier Giroud his sixth. Both will be key for Arsenal success today.