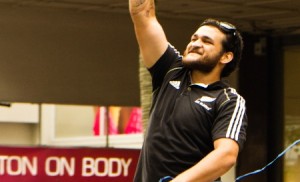 New Zealand scrum-half Piri Weepu has admitted to injuring himself during the All Blacks warm-up prior to the Rugby World Cup final against France.

Weepu missed two penalties and a conversion after tweaking his groin muscle as the teams completed their final warm-up routines and admits he wasn’t ready to come off when he was subbed in the 50th minute.

“I had a tweak of my groin before the game started and I guess the coaches were only looking out for what was best for the team.”

Injuries did threaten to derail their ambitions after losing three key players for the final with world-leading stand-off Dan Carter and his back-up Colin Slade unable to take to the field at Eden Park with third choice Aaron Cruden also succumbing to a knee injury 34 minutes into the contest.