Allardyce denies Chelsea have made approach for West Ham pair

Chelsea have not made contact with West Ham about strike pair Enner Valencia and Diafra Sakho, the Hammers gaffer  Sam Allardyce has confirmed today.

As it has been reported that the Blues have sounded their London rivals out about the availability of the two strikers, who have impressed since their summer moves to Upton Park.

The 25 years-old striker has scored four goals in 23 appearances since his £12m switch from Pachuca. 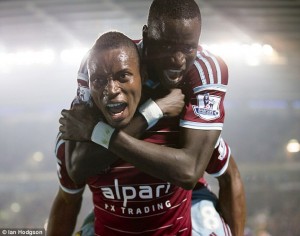 Meanwhile, Sakho has made a blistering start to life in England, hitting eight goals in his first 14 Premier League appearances after arriving from Metz for just £3.5m.

That form has led to speculated interest from Chelsea, but Allardyce insists there has been no approach for either player.

“By email, text or phone? If they’ve sounded us out, which way? The only way they have been sounded out is through the media not through club-to-club.”´said Allardyce.

According to the reports, the Stamford Bridge side is looking for the move of both striker after the possible exit of Mohammed Salah and Andre Schurrle. The Egyptian star is looking for a possible move to the Italian club Roma while the German World cup winner, Schurrle is ready for move back to Bundesliga.