He said the Germany international will remain at the club until at least June 30.

“I’ve heard nothing. They’re just rumours. He’s our player, at least until June 30” said Ancelotti. He added that he has no doubts about him,he is a player of Real Madrid and I treat him as such.

The German World Cup champion, Khedira, whose current contract is set to expire in the summer, has been linked with Arsenal and Bayern Munich in recent months. 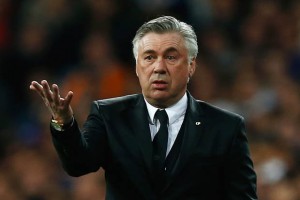 The 27-year-old recently told media that he would be very happy to prolong his stay at the Bernabeu.But the club had been surprised by thisremark, as the player has not communicated any desire to sign an extension to Madrid officials.

On other hand, the Gunners are ready to renew their interest in Sporting Lisbon midfielder William Carvalho and could be preparing to table a £20 million bid for his services.

Arsenal gaffer, Arsene Wenger has long been interested in the powerful midfielder, but saw talks break down in both the summer and Autumn.

However, Wenger’s hopes to sign the 22-year-old in January appear to have been renewed due to Lisbon’s early exit from the Champions League.