The Anfield side chase German duo

There are rumors of the progress of Hannover duo Lars Stindl and Leonardo Bittencourt possible move to Liverpool in last 48 hours, according to the media reports.

Liverpool gaffer Brendan Rodgers is currently searching for players to replace midfielder Steven Gerrard, who recently announced he will be moving to LA Galaxy at the end of the season.

The England International  Raheem Sterling is also believed to be on the shortlist of Real Madrid, while Lucas Leiva is expected to leave Anfield in the near future. 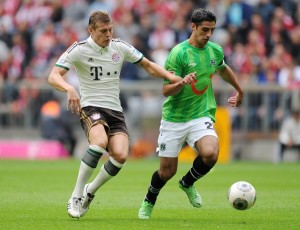 Bittencourt was on the radar of Manchester United last summer but a move to Old Trafford never materialised following the signing of Angel Di Maria.

The German club are enjoying a relatively solid season so far, lying eighth in the Bundesliga and just four points off a Champions League spot.

Liverpool find themselves in the same position in the Premier League, but are five points adrift of fourth-placed Manchester United.

The duo’s decision to leave Die Roten will likely hinge on whether or not the Lower Saxony outfit can qualify for the big time or not. The Northern Irishman will have a variety of midfield options next year regardless, with Adam Lallana, Emre Can, Jordan Henderson and Joe Allen all able to operate in the centre.