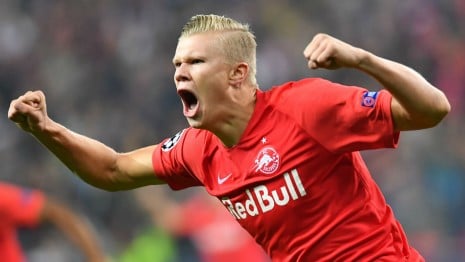 Arsenal are reportedly apart of eleven clubs that are interested and monitoring the situation of teenage sensation Erling Braut Haaland wh0 has taken European football by storm.

The 19-year-old plays for Austrian side RB Salzburg and has already scored an incredible 27 goals in 19 games.

His blend of strength, size and a natural goalscorer’s instinct has got European powerhouses such as Barcelona, Real Madrid, Bayern Munich and Juventus all interested.

The Gunners are in need of some goals in their squad despite their front three consisting of superb players in Pierre-Emerick Aubameyang, Alexandre Lacazette and Nicolas Pepe.

Aubameyang, who is the reigning golden boot winner, is still scoring in a lacklustre Arsenal side having scored 8 goals – a tally only better by three players in the Premier League.

The Gabon international and his strike partner Lacazette are also reluctant to sign a new deal considering that the Gunners are looking like they could miss Champions League football again.

With Unai Emery sacked on Thursday, it also adds uncertainty around the club as reports have suggested that the club have yet to narrow down potential candidates.

Haaland, who has already made his international debut for Norway, has been in scintillating form and could adequately replace the aforementioned pair if they decide to leave the Emirates.

The striker has contributed to a whopping 21 goals in 15 appearances for Salzburg in the Austrian Bundesliga as he has helped Jesse Marsch’s side be unbeaten in the league campaign so far.

It would be easy to doubt his quality in a tougher league but the teenager has been extraordinary in the Champions League so far.

Salzburg were handed a tough draw in the Champions League having been placed with the reigning European champions Liverpool as well as Italian giants Napoli, yet Haaland has coped exceptionally well.

Despite Marsch’s side looking like they will only finish third, Haaland has been a shining light, scoring 8 goals in 5 group games and adding an assist as well for good measure.

The Norwegian has scored in every single group game, a statistic only matched by Bayern Munich’s Robert Lewandowski.

Haaland is the second top goalscorer in Europe’s most elite competition with Lewandowski the only player having a better goal record so far.

There is still one more group game left to play and if results fall their way, European football will be blessed with at least two more games of Haaland at the top level.