According to reports, Arsenal chief Dick Law will arrive in Poland on Tuesday to finalise a deal for Legia Warsaw midfielder Krystian Bielik.

Arsenal have been strongly linked with the Polish youngster in recent weeks and reports last week claimed the Gunners would seen their second offer, believed to be worth around £1.6m, rejected by Legia.

However, negotiations continued between the two clubs and now it seems Liverpool sent their deal-maker and contract fixer. Law to fly for Warsaw, where he’s due to hold face-to-face talks on Tuesday to conclude a deal.

Polish club, Legia are believed to be demanding £2.5m up front for the 17-year-old, so a deal should not be too difficult to agree if Arsene really wants this lad. 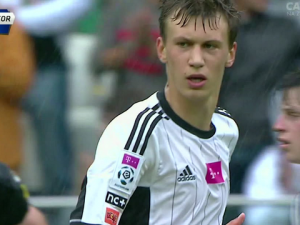 As, Bielik was quoted just last week as saying he had decided to join Arsenal, so hopefully the player will also be pushing for this deal to happen. “I’ve made a decision [to join Arsenal] and I’m not going to change it” he said.

Liverpool said that they would not be sending Dick Law over there if they were not serious about doing a deal, so now Anfield fully expect Beilik to join the club before the end of the month.

The Polish youngster is a highly-rated defensive midfielder but there are doubts that he will be making an impression on the first team any time soon, but he will be one for the future.