The Gunners gaffer Arsene Wenger has confirmed that Arsenal will complete the signing of Gabriel Paulista from Villarreal today.

After weeks of speculation, the Spanish side announced on Saturday night that they had agreed a deal ‘in principal’ with the Premier League side over the sale of their centre-back. 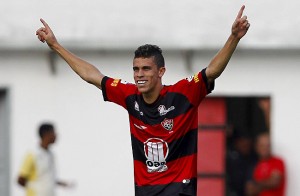 The transfer fee has yet to be confirmed but the English media have reported ‘in the region of £11 million‘ and Sky Sports‘ Spanish football journalist Guillem Balagué has quoted £15 million the player’s buy-out clause.

Arsenal’s gaffe Arsene Wenger has announced that Arsenal are ‘very, very close’ to completing the deal and should have it wrapped up today, saying that the 24-year old has all the attributes to be a top defender for the club.

The Frenchman boss told the reporters after Sunday’s 3-2 victory over Brighton and Hove Albion in the FA Cup:

“They are accurate, it’s very very very close. It should be done I think tomorrow. [He is] a player who’s 24 years old, good size, good pace and a good defender. He plays for only one year in Europe so maybe there are some things to work on but the potential is there.”

The Brazilian Gabriel Paulista is yet to earn a senior cap for the Brazil national team and it is yet to be confirmed if the player has been granted a work permit to play in England. But Arsene Wenger is confident the South American will receive one.

He is expected to arrive in London later today to undergo his medical and sign a contract, so provided there are no late hiccups, Arsenal will have their second January signing completed.