The 21-year-old rising star is seen as Germany’s best keeper after Manuel Neuer and could be a January bargain as his contract is up in the summer.

The Gunners are eyeing up top emerging German keeper Loris Karius. The shot-stopper, 21, is the youngest keeper in the Bundesliga with FSV Mainz.

He is now regarded as Germany’s best player at the position after Bayern Munich’s World Cup winner Manuel Neuer. 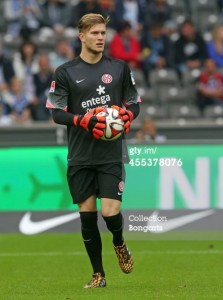 The 6ft 3in ace has worked his way up through Germany’s age-groups to now represent the U21s. Borussia Dortmund, Schalke and Spanish side Valencia have all expressed an interest.

Karius, whose contract is up this summer, has publicly pledged to stay this season after snubbing Portugal’s Benfica in the close-season.

The German young star, who used to be part of Manchester City’s academy set-up, is now also on the Gunners’ radar.

Arsenal are prepared to wait until the summer but rival suitors are looking to snap Karius up on the cheap this month, which may force Arsene Wenger’s hand.

Wenger is looking to build a back-up for David Ospina, as Szczesny is currently struggling with form and his errors last night resulted in Southampton overcoming Arsenal 2-0 in what was a huge blow to the club’s Champions League ambitions.