According to reports, the youngster passed his medical on Saturday to seal the move to Emirates.

With Flamini and Arteta out injured, Gunners have been looking for someone who could provide the back for with much needed cover.

This time the fans will not be as exciting by his arrival as they would have been if Arsenal would have signed a proven holding mid player such as the likes of Sami Khedira or William Carvalho. 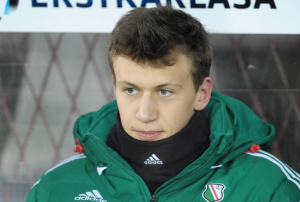 But talking to the media, Arsenal gaffer Arsene Wenger has assured that he has not really signed Bielik to be used as a make shit player but he will be in the first team squad straight away.

“Yes [he will go into the first-team squad]. He’s a defensive midfielder, 6ft 2ins, he has a good energy level and technical level. Also, it’s a gamble. But on what we saw it’s worth taking.” said Wenger.

The Frenchman also stated that it could be a gamble but for 2 million pounds, but he was always going to take this.