Arsenal gaffer will have to final Loic Perrin deal till Friday

Arsene Wenger has until Friday to agree a deal for Saint Etienne defender Loic Perrin before the French club resolve to refuse selling him this transfer window.

An exclusive in French media confirms how St. Etienne are growing frustrated with the fact that the Gunners are showing interest in their captain without actually submitting a concrete offer.

It is believed that Perrin’s representatives have agreed a contract with the north London club but that a deal is no closer to completion as the two clubs remain out of negotiations.

Rather than wait around for Wenger to make up his mind St. Etienne have subsequently put a deadline of this weekend for Perrin’s departure. If the 29-year-old remains at the club by that time then he won’t be the subject of a transfer until at least the summer, with club chiefs obviously keen to keep squad disruptions to a minimum. 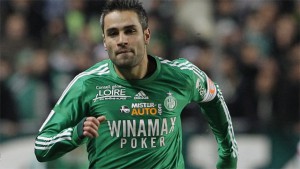 The Gunners’ interest in Perrin has been rumoured for a few weeks now, with Wenger looking to add depth and quality to his side as he looks to ensure that they qualify for Champions League football for another season.

At the moment Arsenal find themselves struggling to solidify a position within the top four, with Chelsea, Manchester City, Southampton and Manchester United threatening to keep them out.

Right now Perrin himself will be expected to agree to a move if indeed Arsenal do end up settling on terms with Saint Etienne. On top of that is Wenger’s aptitude at working with French players, which only bodes well for Perrin with regards to settling into the English game.