According to the reports today which confirmed that Real Madrid gaffer Carlo Ancelotti is privately open to the possibility of selling there prolific French striker Karim Benzema.

The English media reports that Manchester United, PSG and Arsenal are all considering the £40million asking price. The Spanish sources tends to reflect what has been reported in Spain which often reflects the more outlandish tittle-tattle such as Bale to United, etc which take a lot to swallow, let alone c 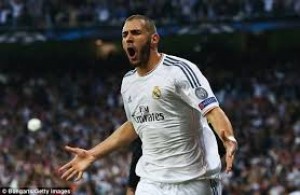 Another report also confirmed the claim that Real Madrid are interested in Raheem Sterling and Harry Kane and that the funds from the sale of Benzema would fund the move for both Englishman.

Whatever you think of the rumour it does sound like Spain is now on alert over the form of Harry Kane. The 21-year-old has netted 18 goals this season and his performance stats in January are up with the best in the league.

Benzema has a contract that is not due to expire until 2019 at Real Madrid after agreeing a new deal last year. The striker from Lyon joined Real Madrid in 2009 and has gone on to make 265 appearances and scored 126 goals.

In the current season the player has racked up 15 goals and has not failed to score less than 20 goals since the 2010 season.