Arsenal have learnt from their mistakes, declares Olivier Giroud

The Frenchman, Olivier Giroud says Arsenal have ‘learnt’ from their mistakes after their remarkable 2-0 win over Manchester City.

Goals from Santi Cazorla and Giroud either side of half-time at Eithad Stadium handed Arsene Wenger’s men the three points as they ended the Citizen’s 12-game unbeaten run.

Giroud said his side know that they need the momentum to come back into the top four and we are in a good run. Much had been made of Arsenal’s failure to match their opposition when facing the Premier League’s top sides in recent seasons.

The French striker feels that the Gunners have turned a corner in their away games against the top teams. 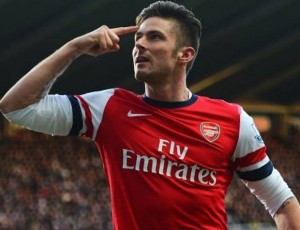 “We learnt from our mistakes because we played too much of our own game before, “said Giroud. “We played well this time because we waited for them and we played well on the counter-attack. Afterwards we scored, tried to keep a clean sheet and we could have scored more goals.” He added.

The 28-year-old striker has now scored six goals in 11 games for Arsenal this season. The forward missed a large part of the season after suffering a broken leg during the 2-2 draw with Everton back in August.

Wenger’s men will next travel to Brighton and Hove Albion in the fourth round of the FA Cup on Sunday, before a home clash against Aston Villa at Emirates Stadium on 1 February.