La Liga champions Atletico Madrid have no intention of selling Mario Suarez, according to the club president Enrique Cerezo.

Thr Gunners have been linked with a move for the defensive midfielder in recent weeks, and despite signing 17-year-old Krystian Bielik from Legia Warsaw, Arsene Wenger sees the young Pole as a player for the future and is believed to be in the market to bring in a more experienced option in the middle before the transfer window shuts. 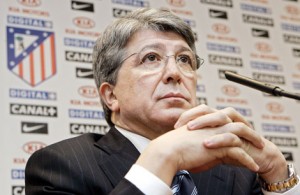 But, Cerezo has reiterated Atletico’s stance on Suarez and want him to remain at the Vicente Calderon after rejecting a reported £7 million bid from Inter Milan.

“As far as I know Mario Suarez will be staying. He is an important player for us.“said Cerezo. “I don’t think we’ll be operating sales because the coach (Diego Simeone) relies on all of the available players until the end of the season.” he added.

The president admits that they are not taking into consideration any idea of dropping someone during this month. So with Suarez out of the picture, who should Wenger look to recruit?

Maybe the Frenchman may not even need to sign a defensive midfielder after Francis Coquelin’s recent performances for Arsenal.