According to the reports, the Premier League pair have been in search of a new number one after both keepers were criticized for their performance in recent months.

Neto, who currently plays for Serie A side Fiorentina, has also attracted interest from league rivals Juventus and is tipped for a club exit in the summer. 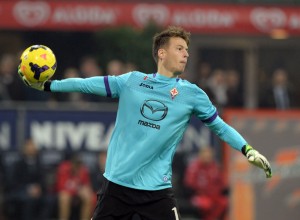 As, Szczesny was making a several  mistakes  this season while he was also recently fined for smoking after the defeat to Southampton, prompting Arsene Wenger to drop him for new signing David Ospina.

On the way to this, the Polish international may be forced to leave the Emirates as Arsenal are already preparing to find another man to stand between the sticks.

The Frenchman might need to tie down a deal soon because he still faces competition from Brendan Rodgers who is also keen on reinforcing the role.

As the Anfield side also faced the same problem this season. Simon Mignolet had some nightmares in the goal and his bench mate is also facing an injury. So Brendon Rodgers is also looking forward to sign Neto during this transfer window.