The Spanish club, Valencia have announced on their official website that the contract of Arsenal target Joao Pereira has been cancelled with the Spanish club. According to reports, he has since signed for Bundesliga club Hannover.

Pereira was out of contract with the La Liga side in the summer but having not played a single minute of action in the league this season, it was decided that his contract should be terminated now.

Though, he has decided to complete a move to Bundesliga side Hannover on a short-term deal instead, as confirmed by the club’s official website. 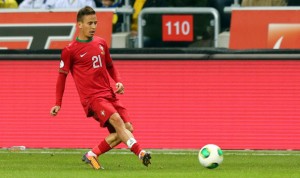 ”We wanted to bring in another right back for the second half of the season. Joao Pereira brings with him a lot of experience and first-class qualities to help us in the short-term.”

As Arsenal boss has been on the lookout for defensive additions this month and completed the transfer of his main target, Gabriel Paulista, from Villarreal yesterday, as reported by the Daily Mail

The uncapped Brazilian could even make his debut against Aston Villa on Sunday and with the January transfer window closing on February 2nd, Wenger may have been tempted to make his move for Pereira.