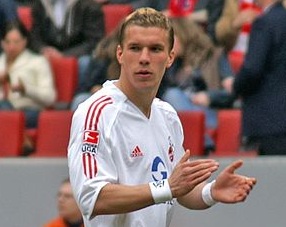 Arsenal may still make a dramatic January move for Lukas Podolski this January despite Wenger’s denial that the player is of no interest.

Podolski is looking for a move this January and although his current Bundesliga club wish to keep him, the prospect of Champions League football before the Euro 2012 competition remains very tempting. Arsenal has watched the Germany international on many occasions throughout the last 12 months and Wenger does have a record of denying interest before bringing a player onboard.

With a loan deal for Thierry Henry practically certain, Arsenal still wish to have someone in that area for the long term but should a deal be agreed with Cologne then the exit doors will appear much wider for Andrey Arshavin who has been linked with a move back home to Zenit St. Petersburg.

The ongoing argument is that Gervinho is currently the top choice for the left forward position, a position where Podolski has excelled for his country in recent times. Although Gervinho will be off to the African Cup of Nations towards the middle of January, Arsenal fans will either be hoping for a turn of form from Arshavin or the arrival of Podolski.

An option that could be considered would be to move Gervinho up front alongside Robin van Persie to allow Podolski to fit into his more natural position. Keeping both players happy will not be an easy task but who would bet against Arsene Wenger doing it?