The Gunners target, Sebastian Giovinco has finally resolved his future after he joined Major League Soccer side, FC Toronto.

The Juventus striker was out of contract in the summer, after spending all his years in Turin, but after being sought after by a host of leading European clubs he has opted to join the revolution at MLS.

At this point, It is an unusual step for the diminutive striker to take, because he is just 27 and in the prime of his career. He has signed a five year contract with the Canadian based side. 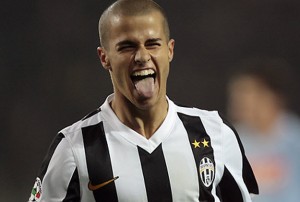 At a number of points in his career at Juventus, when the 27 years-old was still the darling of the Old Ladies, he was constantly linked to Arsenal.

As, Sebastian Giovinco’s next destination now decided, he joins a long list of former Arsenal targets that would not play for the North London club, which brings to a close another episode of a player who was repeatedly linked to the club.

The striker has 27 caps for Italy, although he has not featured much for the national team because of his recent struggles at Juventus. “I’m excited to sign with Toronto FC today and look forward to joining the club this summer.”  said Sebastian Giovinco.

The very few fans know how close Arsenal was to signing him when the speculation linking him to the club several years ago was at an all time high.