Arsenal poised to join the hunt for La Liga talisman 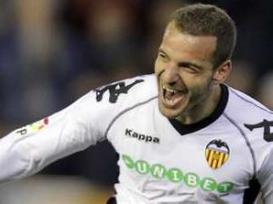 Interest in Valencia playmaker, Roberto Soldado, is gaining momentum after it emerged that Arsenal are ready to join in the chase to sign the attacker.

Soldado has been in inspiring form this season, both in the Spanish domestic league and the Champions League, highlights of which be landing a brace in the 3-2 loss against Real Madrid as well as a hat-trick in the 7-0 victory over Belgian side Genk.

Despite signing Gervinho, Alex Oxlade-Chamberlain, Mikel Arteta and Yossi Benayoun during the summer transfer window, the Gunners still appear to be lacking in the creative department after losing star midfielders Cesc Fabregas and Samir Nasri, and continue to be linked with big-name forwards and midfielders.

If the 26 year-old were to join the North London side, it could also go a long way in easing the burden currently placed upon Dutch forward and club captain, Robin van Persie, who is taking the vast majority of the scoring responsibility, with only new signing Park Chu-Yong and the faltering Marouane Chamakh as backup.

Since joining from Getafe 18 months ago, Soldado has scored 26 goals in 47 appearances for Valencia, a ratio most managers could admire.

Although the striker is older than Arsene Wenger has become accustomed to bringing into his fold, the Emirates Stadium side are undergoing a state of transition and as a result can’t afford the luxury of building for the future when instant success is so important to owners in the modern game.

The Real Madrid youth product completed a £10m switch last year and that price-tag wouldn’t be expected to have changed a lot, however due to the remaining years left on his contract and a rise in performance, the forward could cost closer to £15m.

Manchester United are another team known to be interested in the forward, and will provide formidable competition in gaining his signature.