The Gunners are considering a move in signing Paris Saint-Germain striker Edinson Cavani, according to the media reports.

The Gunners’ gaffer Arsene Wenger is looking to add a prolific striker to his squad and has set his sights on the Uruguayan international. He has been in fine form for the Ligue 1 winners, scoring 14 goals in all competitions this season.

The Uruguayan has been leading PSG’s attacking lineup, while Zlatan Ibrahimovic was sidelined with injury. The north London club allowed Lukas Podolski and Yaya Sanogo to leave the Emirates on a short loan spell to Inter Milan and Crystal Palace respectively, in January. 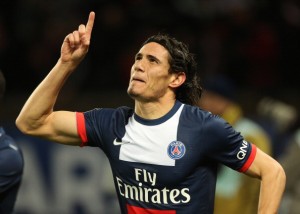 The situation has left Wenger with Olivier Giroud and Joel Campbell as the only recognised strikers in the squad, while Danny Welbeck is recovering from his injury. The Frenchman wants to add more firepower to Arsenal’s squad.

Cavani is the first name in Wenger’s list of striker targets and the Premier League giants are preparing a £45m bid to lure the South American free-scoring striker to leave his current employers and make a switch to the Emirates.

Arsenal’s league rivals Manchester United are also interested in securing the services of the former Napoli star. Louis van Gaal wants Cavani to replace Radamel Falcao at Old Trafford after the end of the season.