Arsenal set to compete with Manchester United for young defender

Reports claim that the Gunners are looking to rival The Red Devils for a move for young French centre back, Aymeric Laporte

According to reports, Arsene Wenger is keen on trying his best to hijack Manchester United’s move for Athletic Bilbao centre back, Aymeric Laporte.

The youngster is widely considered as one of the best defenders in Spain at the moment and has also courted a lot of interest from Real Madrid who could possibly move for the Frenchman if the likes of Sergio Ramos and Raphael Varane do not commit to long term deals. 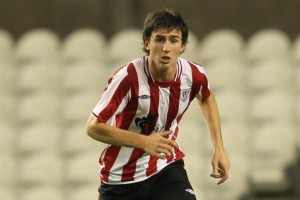 And Wenger, who only recently acquired the services of Gabriel Paulista from Villarreal, still wants to add more strength to his team’s defense and despite knowing that Laporte’s inclination is actually towards Manchester United, is still going to try his luck.

Manchester United have to pay at least 31.5 million pounds in order to acquire the youngster but it appears that their resolve could be tested if The Gunners come up with exactly the type of money that it would take to convince Bilbao into letting go of a player who definitely has a great future ahead of him.

However, Wenger might also consider other options should he lose the tug of war.