The Gunners have collected maximum points from their last two fixtures,  and now they will be looking to finally break into the top four, when they take on Southampton on New Year’s Day.

Wenger’s men were perhaps fortunate of beating Southampton when the two met at the Emirates earlier this season, and while Saints have slipped somewhat since then, their draw against Chelsea last time out proves that they are still a tough nut to crack.

Currently the two sides are tied on points, with the Saints occupying fourth spot on goal difference, but Arsenal gaffer, Arsene Wenger will demand nothing short of three points from his side today.

There will be a slight change in backline, as  Kieran Gibbs expected to replace Nacho Monreal, who picked up a knock in the win over West Ham. 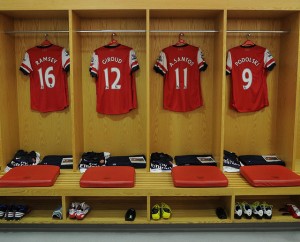 Last time the Frenchman set his side up for a very physical encounter last time, opting for a defensive midfield duo of Mathieu Flamini and Francis Coquelin.

But this time around, it is likely that he will go for a more attacking approach. This means Coquelin will drop to the bench in favour of Tomas Rosicky, who should partner Santi Cazorla in the middle, with Flamini behind them.

Oliver Giroud’s suspension and Yaya Sanogo’s injury absence means that Alexis Sanchez will most likely play in a central role despite his own fitness struggle.