The Gunners midfielder Francis Coquelin is pleased that he is now a feature of the Arsenal first-team once again, explaining how his recent loan spell in the Championship at Charlton has helped him in an interview with Arsenal player.

Coquelin spent last season on loan at German side SC Freiburg but was played mostly out of position on the left hand side of midfield and struggled to make an impact in Germany.

But his loan spell at Charlton was far more productive, so Arsenal called him back early from his spell with the Addicks.

Now he has played in seven games since his return to the club, adding a touch of mobility to their midfield since his return and in the interview Coquelin declared he was ready to try and prove himself good enough for Arsenal:

“It’s been a couple of exciting months for me. I’ve been out on loan to Charlton and that was a good experience for me. Now I’m back at Arsenal and playing again, so I’m enjoying it.” said Coquelin. 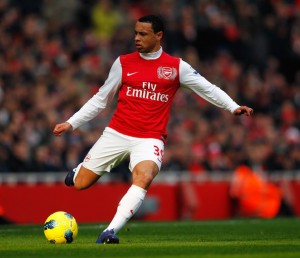 He said the manager called me for a reason, gave him his chance and he is now trying to prove what he can do on the pitch. He has been here long enough so he know everyone quite well. He added that Everyone welcome him , so he think settling in will be easy.

Coquelin’s Arsenal career seemed to be coming to an end when he was cast away to Charlton but it looks as though that move has been the best decision in his career so far. Time will tell if this is a flash in the pan, or if Coquelin really has made himself a permanent fixture at Arsenal.