The England winger Theo Walcott has claimed the current Arsenal attack is better than the 2006 strike force. He has played alongside Thierry Henry and Robin van Persie since joining Arsenal in 2006

The 25 years-old joined the Gunners that year, playing alongside members of the 2003-04 ‘Invincibles’ side such as Thierry Henry and Dennis Bergkamp. 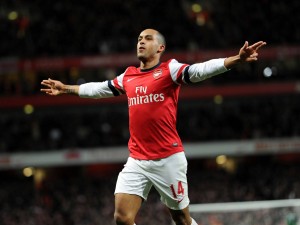 “I think this squad probably does beat it, but we need to prove it.” said Walcott

“When I came, it was Robert Pires and Freddie Ljungberg, Bergkamp, Thierry and Jose Antonio Reyes – that’s some attacking force as well. When we go and achieve a little bit more than winning the FA Cup, then I think we can stand up and say this is the best attacking line up we’ve ever had.” He added.

Walcott, who has missed the entire season through injury, described Welbeck as a “workaholic” and agreed with Oxlade-Chamberlain’s comparison of Sanchez with a “Duracell bunny”.

He said that obviously he will be coming back as well, and then Arsenal have the likes of Aaron and Jack in midfield. The list goes on, that’s how good they are going forward. It is a headache for the ay manager when you have that many great attacking options.