Arsenal’s unbeaten when their possession is under 45% since 2003

It has emerged that the north London giants are unbeaten in away games where they have had 45% of the ball or less since 2003.

Arsenal manager Arsene Wenger may be thinking about a change in philosophy after Sunday’s surprise win at Manchester City.

The Frenchman changed his strategy for the trip to the Etihad, deploying a more defense-minded formation and keeping the majority of players behind the ball in what proved the club’s lowest possession percentage since Opta stats began. 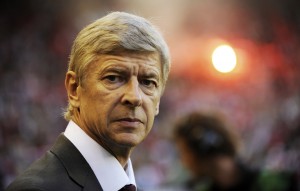 The Gunners ran out deserved 2-0 winners and it has since emerged that the north London giants are unbeaten in away games where they have had 45% of the ball or less since 2003.

The counter attacking football has been a major facet of European football in recent seasons, with the likes of Real Madrid and Borussia Dortmund dominating their opponents through patient approach play and lightning-fast attacks.

Whether Wenger reverts to this relatively new system for Arsenal remains to be seen, but the evidence is there and it should be taking into account by a manager who has previously proven stubborn with his footballing philsophy.

So far, the Gunners have a mix season, as they are still fighting for the top four spots in Premier League table. Currently they are placed at 5.