The Frenchman has confirmed that fears over the long term chronic Achilles injury of Laurent Koscielny played a part in his decision to sign Gabriel Paulista from Villarreal.

Arsenal gaffer has been discussing the signing of the Brazilian defender to the official Arsenal website, during which he said:

“We needed another centre back because we have lost Debuchy. Monreal can play centre back and we are a bit short there if something happens, especially with the Achilles [problem] of Koscielny since the start of the season.” 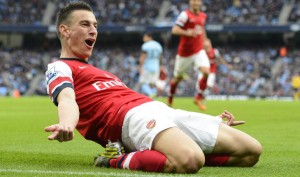 “We needed some cover, or we would not be responsible. [Gabriel] can play right back and left back, and that is of course a good quality as well.” he added.

Laurent Koscielny first began suffering with the problem in October. He was sent home early from international duty with France after reporting the problem upon arrival and he proceeded to miss almost two months of action. He then missed most of December after the problem flared up and it seems to be an ongoing issue that Arsenal will have to deal with.

The Emirates side have had to use the likes of Mathieu Debuchy and Nacho Monreal at the heart of defence at times this season because of injury and suspension problems.

Arsenal sold Thomas Vermaelen to Barcelona in the summer and failed to replace him, which has caused Arsenal and Wenger some issues this season. Wenger also waxed lyrical about his new signing, saying he was perfect for the Premier League.