The Reds manager, Arsene Wenger placed the blame squarely on his own side following their 2-0 defeat at Southampton.

The Frenchman has indicated that Arsenal forward Lukas Podolski could now be set for a move to Inter Milan despite having previously described the Italian club’s interest as a “joke.”

The German star, Podolski recently said he was set to seek talks with Arsenal over his future after growing frustrated with his lack of playing time, and Inter boss Roberto Mancini confirmed he was eager to sign the player.

Wenger then said Inter’s interest was “not serious,” but he confirmed after his team’s 2-0 defeat to Southampton that the Nerazzurri are now ready to offer more realistic terms for the Germany World Cup winner. 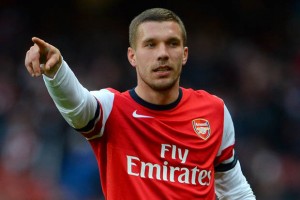 “The first proposal was farcical. After, they came back a bit more serious. ‘Inevitable’ in a transfer is very difficult to say, but we’ll see what happens.” Said Wenger.

According to media reports, the Inter are now offering to take the striker on loan with an option to complete a permanent deal for five million pounds at the end of the season.

There were reports that earlier claimed Podolski had stormed out of training on Wednesday as he was frustrated that Arsenal were blocking his move to Inter, but the 29-year-old used his Twitter account to deny that was the case.