The Gunners midfielder Francis Coquelin will be given a new contract, according to Arsenal gaffer Arsene Wenger.

Coquelin has impressed with some outstanding displays in recent weeks, not least in last weekend’s 0-2 win at champions Manchester City, and has now established himself as the Gunners’ first-choice midfield anchorman.

Now his efforts will be rewarded with a contract extension. The 23-year-old’s current deal expires at the end of the season and Coquelin is already free to sign a pre-contract agreement with an overseas team. 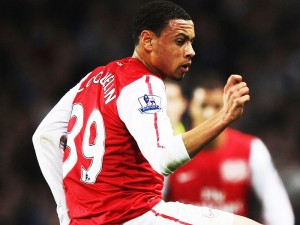 The Frenchman appeared to be winding down time until the end of his existing contract after falling out of the first-team picture in the last couple of seasons.

He had a spell on loan at Charlton Athletic earlier this season. But Wenger claims he had been deliberately sent out to get match fitness with a view to a return to the Arsenal team after the Gunners boss noticed an improvement in his performances in training at London Colney.

While speaking at a press conference today, the Gunners boss said:

“I saw that he made huge improvements in training so I sent him on loan for match practice. He took that challenge and he’s done very well. We will offer him a new deal.”