The German International, Lukas Podolski launched a stinging verbal attack on his former boss Arsene Wenger, claiming the Frenchman showed a lack of respect over his departure.

Podolski will spend the remainder of the season on loan with Inter Milan who will likely make the deal permanent this summer.

The 29-year-old, who spent two-and-a-half years with the Gunners cut a frustrated figure on the sidelines after being ostracized from the Arsenal lineup despite a couple promising performances when given the chance.

During his interview in media, he claimed that he was not offered enough respect from Wenger and suggested the Arsenal boss had further issues with the German international who failed to earn a single Premier League start. 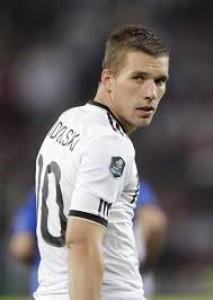 He said nothing to me. He did not call me or say goodbye” said Podolski.”I don’t need flowers or a kiss from him. But it is about respect, about saying goodbye. For me respect is important.” he added.

Podolski claimed that he did everything for the club he possibly could have. He don’t believe did anything wrong even admits never get drunk in a club. But still he wish all of Arsenal and their amazing fans the very best for this season.