There were rumours are doing the rounds that Mathew Ryan, Club Brugge’s first-choice goalkeeper when not in action for his country, is a target for Liverpool.

This notion has certainly registered with the player’s agent and perhaps unsurprisingly, Mikkel Beck appears to have welcomed the interest.

“Playing in the Premier League would be of interest to Mat as it is one of the best leagues in the world and knowing how ambitious Mat is, it is the kind of league he would like to play in.” Said Beck 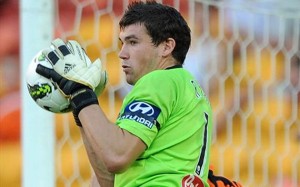 A double A-League winner with the Central Coast Mariners, Belgian Pro-League outfit Club Brugge extracted Ryan to Europe in May 2013 and weren’t disappointed.

Their number one went on to pick up the Belgian league’s Goalkeeper of the Year award for the 2013/14 season as Club Brugge went mightily close to landing the title.

That stellar form earned the 22-year-old Australia’s number one jersey at the World Cup 2014 and it has continued into the current campaign.

Ryan has been integral to success on both fronts, keeping 13 clean sheets across the competitions as the undisputed number one.

At such a young age Ryan appears to have the world at his fingertips, so a summer rush for his signature seems inevitable with Liverpool the early frontrunners.