While regularly the rumour mill is rife at this time of the season and Liverpool are one of the big clubs constantly involved with transfer speculation regarding their next target.

The latest transfer gossip surrounding Liverpool is for goalkeeper Marc-Andre ter Stegen, with the Barcelona keeper revealing he is desperate to play more football this season and he is being linked with a six-month loan move to Anfield. 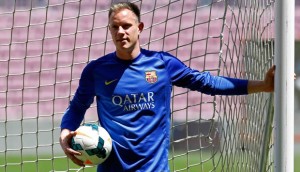 The German shot-stopper is yet to make an appearance in La Liga this season thanks to the form of Claudio Bravo and he is desperate for first-team action.

He has made ten starts for the Catalan giants since moving from Borussia Monchengladbach for £10million last summer but they have all been in cup competitions and he wants to be playing week in week out in the league.

Liverpool gaffer is still on the lookout for a goalkeeper with Brad Jones and Simon Mignolet coming under fire this season for their performances and the Reds’ boss might be able to tempt the German stopper to Anfield with the chance of playing regularly.

The signing of a new goalkeeper could be the difference between Liverpool finishing in the top four or not. The Anfield side struggled in first phase of the season and mix performance from their goalkeepers is also a reason for that show this time.