Home » Football » Chelsea » Blues ask Fiorentina that they will only pay £20.6m for winger Juan Cuadrado

Blues ask Fiorentina that they will only pay £20.6m for winger Juan Cuadrado

The Blues have told Fiorentina they are only willing to pay £20.6m for Colombia winger Juan Cuadrado.

Chelsea have made an enquiry for the 26-year-old, who they consider to be a suitable replacement if Mohamed Salah and Andre Schurrle depart to Roma and Wolfsburg respectively this month.

Considerably, neither Salah or Schurre were in the squad for the Capital One Cup semi-final first leg against Liverpool last night. Meanwhile, there were rumours that Cuadrado was at Anfield, however he has been named in the squad for Fiorentina’s Italian Cup match against Atalanta today. 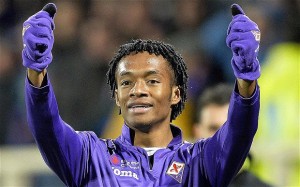 The Columbian is keen to leave the Serie A side, but has a clause in his contract worth £26.8m. Fiorentina are determined not to accept anything less, however Chelsea are hoping to do a deal for less anyway.

Both the clubs have formed a relationship recently with Marko Marin being loaned there for the first half of the season, although he has now left to join Anderlecht instead.

With Roma looking to offer a loan deal for Salah with an option to buy for £12m in the summer and Wolfsburg prepared to pay out £23.5m for Schurrle, Chelsea’s recent policy of improving their net spend to comply with Financial Fair Play will continue.

The Portuguese gaffer didn’t deny his interest in Cuadrado when asked last night, but simply stated he had ‘no idea’ whether he was at the ground.