The English media has reported that Chelsea have made enquires about the possible signature of La Liga legend Sergio Ramos.

The Stamford Bridge side have made contact with the agent of Manchester United and Arsenal target Sergio Ramos over a possible summer switch.

Ramos has done it all. He’s played 124 times for Spain, in which time he’s won The World Cup and two EURO Championships. At club level he added a Champions League winners medal to his 3 La Liga titles in May.

Ramos been a super player for the Champions League winner Real Madrid at right back and in the middle of the defence. And he would certainly add personality to the C 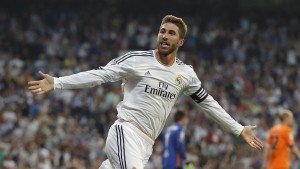 Yet several analyst still can’t imagine that Jose Mourinho doing a deal for the lad from his former side, whose contract expires in 2017.

They think that the Portuguese might prefer to go for a player who wouldn’t cost so much in wages or fees and who the Chelsea boss could mould into a superstar – someone with his best years ahead rather than behind him.

Still the 28 years-old has at least 3 years of top football left in him, of course, and it’s difficult not to admire such a player.

The Spaniard is a sensation for his side ever since he started playing for Real Madrid. It will not be wrong if we say that he is the backbone of Real’s defense.