However, Chelsea boss had cause to be the happier with the 1-1 draw which makes his team favourites heading into next week’s second encounter.

The Blues were indebted to goalkeeper Thibaut Courtois for ensuring there was still something to play for in the second leg as the Belgium international kept the hosts at bay with a string of saves after the break. 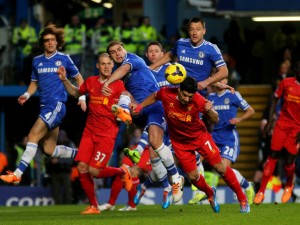 “Obviously Liverpool didn’t deserve to lose but I go (away) frustrated,” said Mourinho. “We had lots of situations where we recovered the ball in a low block, we recover the ball so many times, and we were facing a three defenders tactical system with lots of space to counter-attack.” he added.

The Portuguese admits that Eden (Hazard), Willian and Diego (Costa) were in great positions buthis side missed so many passes. Recover the ball, lose the ball.

“Today it was fantastic defensive work, recover the ball against a very good team with creative players, fast players, but we were not efficient in the transition. To score only one goal frustrates me.” the Chelsea gaffer said after the match.

The visitors went ahead through Hazard’s 18th-minute penalty but that was their only shot on target, and a brilliant solo effort from Raheem Sterling levelled things up.