Partizan’s midfielder is a free agent in the summer, but the Premier League leaders won’t wait that long.

According to reports in Serbia, there are speculating that the Blues are close to securing the services for Partizan Belgrade midfielder Danilo Pantic, ahead of a number of other European behemoths.

The 18-year-old’s contract expires at the end of the current season, but the Stamford Bridge outfit are apparently prepared to splash out around £2m to get in ahead of other reported interest coming from Ajax. 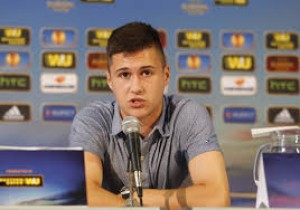 Pantic would add to what is already a burgeoning Serbian presence in west London, with Branislav Ivanovic and Nemanja Matic are playing for the blue in fine style this season. The Serbian media claims that any deal will be finalised in the next 10 days, with the Belgrade club desperate not to lose their starlet for nothing in the summer.

But don’t expect the youngster to be gracing the Premier League with much regularity this season, with a switch to the Netherlands the likely next stop for Pantic. Currently, Chelsea have Wallace, Josh McEacharan and Bertrand Traore on loan at Vitesse, a club that seem to have formed a partnership with the Premier League leaders in recent years.

Pantic has featured 12 times for Partizan this season, including five matches in the Europa League, playing a full 90 minutes against Tottenham in September and scored a goal.