Chelsea are set to complete the signing of Partizan Belgrade youngster Danilo Pantic, according to the reports in media today.

The report claims that the youngster has said he is moving to Jose Mourinho’s side before the end of the January transfer window on Monday.

Pantic has reportedly refused to sign a professional contract with the club though, meaning they will pick up just £670,000 for his services. 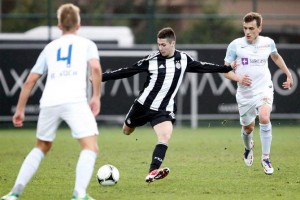 “In the situation we are now in, going to Chelsea would be the best solution for me and for Partizan,” said Pantic  “I am not sure when I will be back in Belgrade, I believe in the next day or two, and a transfer should be done this week.” he added.

As now the increasingly likely transfer of Pantic to Chelsea would conclude what has been a long and protracted negotiation for the youngster, which has had some false starts.

Chelsea previously thought they had agreed a £1.25 million deal for the youngster, who revealed he had turned down a number of clubs, including Serie A giants Juventus, in order to sign for the Blues. He had reportedly agreed a four-year contract with the club, who would then loan him to Vitesse Arnhem.