Chelsea’s potential sale of Andre Schurrle has been heavily covered over the past week or so. It’s thought that Jose Mourinho has become frustrated with the player and that he in turn would be tempted by a move back to Germany.

In reality it appears to be speculation based on Schurrle getting less games for Chelsea and on the Stamford Bridge club probably needing to sell before they can buy big during the current transfer window. 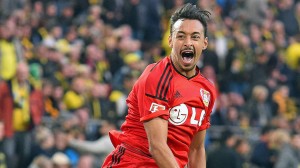 On yesterday afternoon, there were media reports from Germany over the future of Thorgan Hazard. Bayer Leverkusen have grown very fond of him indeed, and want to secure him for next season and perhaps even longer term.

The Edan Hazard’s younger brother is happy there too and it’s a player and a club who appear to be getting the best out of each other right now. If only it was always thus.

On other side , Chelsea have been linked with a move for Karim Bellarabi again. For the second time in two weeks German magazine have named Chelsea are being interested in him.

Bayer Leverkusen are trying to get him to sign a new contract and remove a buyout clause which is active in summer 2016 at just €8m.

The 24 year old has been having success as a forward this year and can operate on the wing or through the middle. He’s a Germany international, but is he really any better than Schurrle and he is more exciting long term than Thorgan Hazard?

Mostly will say no, so the links are strange but then there’s a good chance Bellarabi would be a bargain, and if the others are sold for high fees then it’s another tick for FFP.