The German International  is on the verge of completing his return to the Bundesliga. Schurrle’s agent has confirmed a verbal agreement had been reached between Chelsea and Wolfsburg for a £22.5m deal.

“There are still a few things to discuss, but we’re no longer talking about figures.” said Haspel .

The German club Wolfsburg are holding back on confirming the transfer, focusing instead on tonight’s Bundesliga clash with Bayern Munich. The clubs  director of sport Klaus Allofs said: 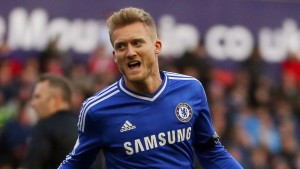 equired signatures are still lacking. No contract has been signed and I’m a bit old-fashioned and there are still some obstacles to get round. The ink is not yet dry.”

Other than the 24-year-old forward is certain to return to Germany, where he played for both Mainz and Bayer Leverkusen before joining the Blues in 2013.

Schurrle would become the most expensive player in Wolfsburg’s history, eclipsing the £16.5m they paid Chelsea for Kevin De Bruyne in the summer.

Schurrle is one of the key players in the German team and his role in German’s World cup win was amazing. The player want to move from Stamford Bridge because he couldn’t able to  find more match time under Mourinho.