Chelsea are hopeful of completing the signing of young Serbian centre-back Srdjan Babic before the transfer deadline on Monday night, as reported by the media today.

Babic, who plays for Vojvodina Novi Sad, has represented Serbia at U17 and U19 level and, as claimed by the en glish media, Jose Mourinho is said to be interested in acquiring the 18-year-old’s services this month before the close of the window.

The reports claims that Chelsea chiefs are working hard to get the deal done, and are using Serbian agent Vlado Lemic to help see the deal over the line; Lemic has previous with the West London club, helping them bring in the likes of Branislav Ivanovic and Nemanja Matic in previous transfer windows. 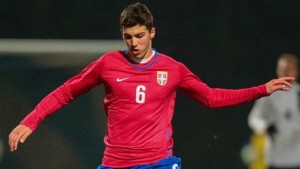 As no major transfers thus far this month, although rumours that Chelsea are chasing the signatures of both Douglas Costa of Shakhtar Donetsk and Juan Cuadrado of Fiorentina has gathered pace over the weekend.

The Stamford Bridge will take on Liverpool in the Capital One Cup semi-final second leg at Stamford Bridge, following last week’s 1-1 first leg draw at Anfield. This tie comes just three days after the Blues were shocked at the Bridge by League One Bradford City in the FA Cup, as the Bantams saw off the Premier League leaders 4-2 after being 2-0 down after 38 minutes.

Right now Chelsea are five points clear of champions Manchester City, who they face at Stamford Bridge on Saturday night in the weekend’s biggest clash.