The Gunners long pursuit of Brazilian defender Gabriel Paulista has paid off as the 24-year-old has signed a long-term contract with the Emirates side.

The player has arrived from La Liga outfit Villarreal for a fee believed to be around $20 million as the release clause in his contract was met.

Arsenal gaffer Arsene Wenger has not been keeping his search for a new central defender secret and has finally landed his man after Gabriel had to go through a work permit appeal, which he won, to seal his move to the Premier League. 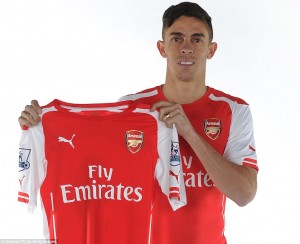 illarreal was as a center back. He can also play in both full back positions. Paulista played 21 times in 2013-14 and has played in all 19 of the Yellow Submarines La Liga matches this term.

This new signing will add much-needed depth as Arsenal only had Per Mertesacker and Laurent Koscielny as recognized center backs in their current squad. Gabriel may well oust Mertesacker in the long run, as the 30-year-old German international has looked increasingly shaky at time for the Gunners this season.

Finally, Arsene Wenger full fill  his fans, analysts and everyone else wish which have been screaming out for months to buy a center back.