The Reds gaffer Brendan Rodgers has confirmed that the club and Raheem Sterling’s representatives are in talks, but expects the attacker to commit to a new deal at the club in the near future.

Regardless of only being 20-years-old, Sterling has become a key player for Liverpool, and he played an integral role in their title challenge last season. 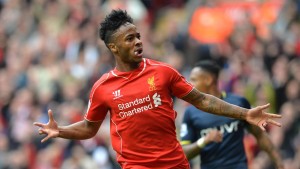 The Jamaican-born star has pace, skill, and movement have seen him establish himself as one of the most exciting talents in Europe, and Real Madrid have been linked with the player.

As a result of Daniel Sturridge’s injury problems, much of Liverpool’s attacking play has had to go through Sterling this season. He can play across the frontline, and he has been used as a striker recently, as Mario Balotelli, Fabio Borini and Rickie Lambert have fully convinced since this season.

The England International has scored four goals and registered five assists in 21 league appearances this season, and he was given slight a mid-season break by Rodgers to ensure he doesn’t suffer from burnout.

Sterling returned to the team in the win against Aston Villa last weekend, and he scored an excellent solo goal against league leaders Chelsea in the first-leg of the Capital One Cup semi-final on Tuesday.