The Reds boss Brendan Rodgers does not think that they will be doing too much business in the January transfer window, despite constant links to potential new signings.

“It will be quiet,” said Rodgers. “I’ve said before we wouldn’t be doing much over the course of January. There are players who are linked with Liverpool all the time. That may be agents looking to get their player a move. For us, it will be pretty quiet.” He added

Before liverpool recent run of good form, fans were crying out on Liverpool to sign a centre-forward and a goalkeeper this month, but Rodgers has now led us to six wins in their past eight fixtures in all competitions, and they have only lost once in 14. 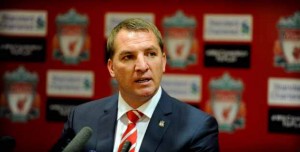 With Fabio Borini and Rickie Lambert scoring at the weekend, and Daniel Sturridge closing in on a return from injury, Liverpool striking options seem a little more promising… In goal, Simon Mignolet has kept consecutive clean-sheets, and was singled by the boss following the victory over Aston Villa.

Arguably Rodgers’ best ever signings as Liverpool boss came in January, when he secured Daniel Sturridge and Coutinho for a combined fee of around £23m in 2013, but it doesn’t seem like they will be making any similarly excellent purchases this time around.