The Reds manager Brendan Rodgers has again revealed that the Reds will not make any big signings during the January transfer window.

“It will be quiet. I’ve said before we wouldn’t be doing much over the course of January,” said Rodgers 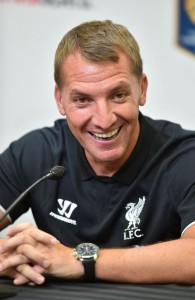 The Merseyside club was one of the busiest clubs during the summer transfer window with the manager spending over £115m. Rodgers brought in nine new players to make up for the loss of Luis Suarez and their return to the Champions League, the first time since 2009.

Despite the heavy spending and the new arrivals, the Anfield outfit have failed to replicate the form of last season that almost took them to their first Premier League title in the history of the club.

The Reds have made a poor start this season and this sees them in eighth place, 17 points of leaders Chelsea and five points behind United in fourth place.

As, most of the summer arrivals have failed to settle, mainly the strikers Rickie Lambert and the £16m-rated Mario Balotelli have failed to live up to expectations. The latter is yet to score in the Premier League for Liverpool this season.

The club have also missed second top-scorer of last season, Daniel Sturridge, who has failed to play a game since the end of August due to multiple injury troubles.