Home » Football » Liverpool » Brendan Rodgers as one of the best in the world, says Henderson

Brendan Rodgers as one of the best in the world, says Henderson

Liverpool Vice-Captain, Jordan Henderson ranks Brendan Rodgers as one of the leading managers in world football. He says Rodgers is the right man to put the Reds back in the mix for a top four finish.

The Reds brushed aside Swansea City on Monday night at Anfield to move up to eighth in the Premier League table and extend their unbeaten run to four matches.

Remember, with Luis Suarez departure from Anfield and Daniel Sturbridge injury, Liverpool gaffer Brendon Rodgers’ side struggled for consistency earlier in the season. 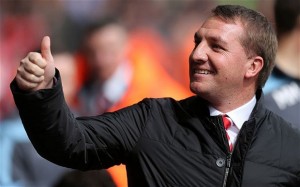 But Henderson says that the boss has continued to work hard at finding a solution to their slow start. He changed the side’s formation to a 3-4-2-1 earlier this month and after two wins on the spin is starting to see the experiment work.

“The manager has been fantastic ever since he came to the club. He’s working really hard for us on the training field to ensure that tactically we are better and improving all the time” said Henderson.

Liverpool signed off for the calendar year with their biggest win of the season and Henderson says the players will reflect on 2014 as a roller-coaster ride in which they achieved great things but in the latter stage, were swallowed into the abyss of mediocrity.