Liverpool gaffer, Brendan Rodgers has revealed that Adam Lallana will be sidelined for more or less a month after the Liverpool midfielder suffered a thigh injury on New Year’s Day.

The 26-year-old Englishman was withdrawn early in the second half during the 2-2 Anfield draw with Leicester City on the opening day of 2015.

He was absent as the Reds secured FA Cup progress by beating AFC Wimbledon last night. The Reporters after the matchasked the manager about his condition and he replied:

“More or less [a month out], it might be a bit shorter than that. It is a slight strain that he has. There’s no real timeline on it yet, but hopefully it won’t be as long as that.”saidRodgers. 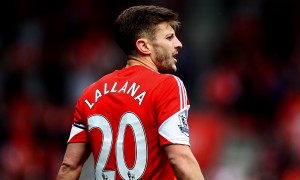 Having spent half of the season toiling in sub-par performance with injuries, Lallan has got back strong with brilliant performance in last one month.

The former Southampton Captain, Lallana is set to miss both legs of Liverpool’s Capital One Cup semi-final against Chelsea on Jan. 20 and Jan. 27, and faces a race against time to be fit for the Premier League derby on Feb. 7 at Everton, the club he supported as a boy.